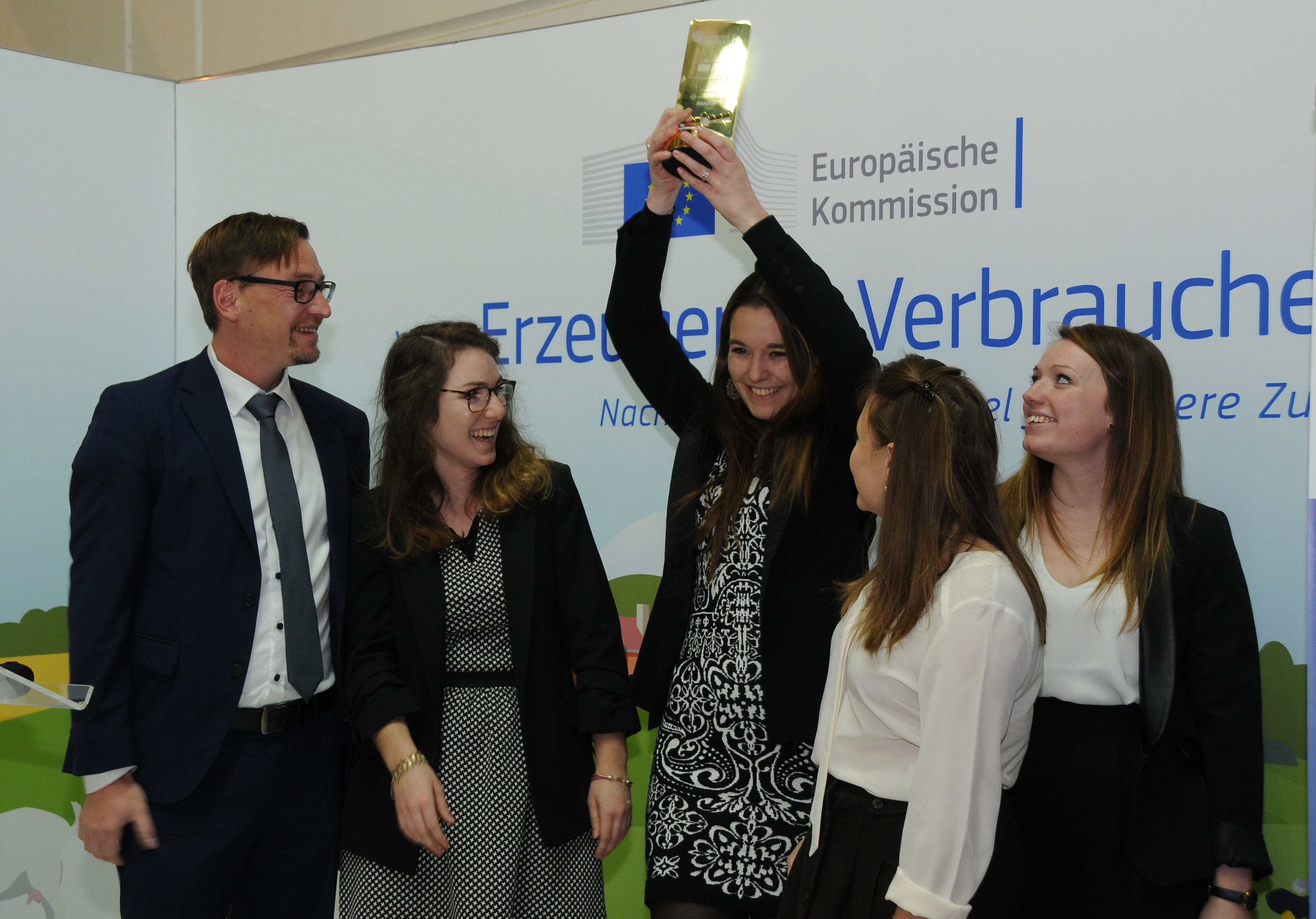 LOS ANGELES, CA, October 6, 2015 — /EPR EDUCATION NEWS/ — XPRIZE, the global leader in incentivized prize competitions, and Google today announced Moonshot, cousins ages 10 and 12 from Brooklyn, New York, and Naples, Italy, is a grand prize winner in the 2015 MOONBOTS Challenge, also considered the “Google Lunar XPRIZE for Kids.” MOONBOTS is an international competition that encourages the next generation of space explorers and innovators by inviting kids ages 8-17 to design, create and program their own lunar rover, based on a legend or theory that inspires them about the moon.

Moonshot team members Sasha Cipani, 10, who lives in Naples, Italy; and Dario Cipani, 12, who lives in Brooklyn, N.Y., with his mom and team captain Sara Cipani; didn’t let distance and time zones get in the way of their shared love of the moon. They worked together online to create their video submission, and then built and programmed their one-of-a-kind simulated lunar mission together using the LEGO MINDSTORMS EV3 robotic platform during Dario’s family vacation to Italy last summer. Their inspiration was Luna, Dario’s sister and Sasha’s cousin, and the idea that the moon we all share can bring people together — just as it brought their family together.

Later this month, the cousins will take a once-in-a-lifetime trip to Japan together to meet the official teams competing for a $30 million dollar Google Lunar XPRIZE, a global competition to land a privately funded robot on the moon.

“Team Moonshot showed ingenuity and innovation in their robotic building and programming, and were creative and imaginative in the way they interpreted their moon ‘tale,’” said Chanda Gonzales, senior director, Google Lunar XPRIZE. “Dario and Sasha were incredibly engaging, and their mission will provide inspiration for kids all over the world.”

In addition to developing their lunar rover, the cousins contributed to science, technology, engineering and mathematics (STEM) education by sharing their innovation with underprivileged children through Associazione Quartieri Spagnoli Onlus – a nonprofit organization in Italy.
The kids’ competition attracted 235 teams from 29 countries, who entered phase one by submitting a written or video entry about what inspires them about the moon.

Teams are comprised of 2-4 members (ages 8-17) and one team captain at least 18 years old. A panel of judges selected 30 teams to qualify for phase two, each of which was provided one of three platform systems (LEGO MINDSTORMS EV3, VEX IQ, MECCANO Meccanoid G15 KS) to build and program a unique simulated robotic mission based on the moon tale they submitted in phase one. In addition, they were asked to contribute to STEM education by sharing their innovation with children and adults in their community.

Along with Moonshot, other grand prize winners are: Mecaliks of Cuautitlan Izcalli, Mexico; Team GalacTECHs of Tustin, Calif.; and Linked Lunas of Fort Lauderdale, Fla.

Since 2010, MOONBOTS has challenged thousands of young people from around the world. In addition to XPRIZE and Google, competition partners include FIRST® LEGO® League, Cogmation Robotics, VEX Robotics Inc., Spin-Master Ltd., the Robotics Education and Competition Foundation (RECF), GeekDad, GeekMom, Robomatter Incorporated and Dexter Industries. More information, including the full list of finalists, can be found at moonbots.org.

About the Google Lunar XPRIZE
The $30M Google Lunar XPRIZE is an unprecedented competition to challenge and inspire engineers and entrepreneurs from around the world to develop low-cost methods of robotic space exploration. To win the Google Lunar XPRIZE, a privately funded team must successfully place a robot on the moon’s surface that explores at least 500 meters and transmits high-definition video and images back to Earth. For more information, visit lunar.xprize.org/.

Tennessee State University (TSU) has awarded The Integrated Solution Group, Inc. a contract to develop a statewide database and web based interactive training assessment system for The Tennessee Early Childhood Training Alliance (TECTA). The system will provide TECTA with a central

database for student tracking and reporting, and a web based interactive learning and assessment environment where material is presented to foster understanding and use of the Tennessee Early Learning Development Standards (TN-ELDS) to training participants providing care and education to young children.

The TECTA program, managed by the Center of Excellence for Learning Sciences in the Division of Research and Sponsored Programs at Tennessee State University, is sponsored and funded by the Tennessee Department of Human Services. TECTA is a consortium of nine TBR universities and community colleges that provides an academic gateway for preparation of professional early childhood personnel. The web-based interactive learning portal will be the first e-learning initiative established by the Tennessee Department of Human Services.

Founded in 1993, The Integrated Solution Group specializes in the design, development, and deployment of database driven custom software applications for Windows and Open Source environments. Typical ISG projects include the development of sophisticated data driven web-sites and smart-client desktop software for business, non-profit, and educational institutions throughout the US. ISG also provides database design and software consulting services.

Library Automation Technologies, Inc. (LAT), a leader in library automation products, is pleased to announce the addition of the LAT-AllAccessPass™ capability to the allCIRC™ product line, which allows multiple machines to act as one, virtual device.

This capability provide a seamless, integrated environment for patrons to be able to use any allCIRC™ machine, regardless of its physical location in the library, for any item, even if that particular item is not physically stored in that particular machine.

Oleg Boyarsky, President and CEO of LAT commented “Since our allCIRC™ machines are already a center point of any library by allowing patron self-checkout and secure media dispensing all in one portable device, with the addition of the AllAccessPass™ we can now make multiple machines act as one. This further enhances the patron experience and delivers unprecedented value to our library customers.”

allCIRC™ is a revolutionary new product, a new way of thinking, a paradigm shift in library security and self service, especially when it concerns media protection. Designed specifically for libraries, allCIRC™ provides both secure CD/DVD/BluRay/PS3… media dispensing as well as a complete book self check system all-in-one highly portable machine at a cost of less than any standard book self check! Because of its unique concept, libraries no longer need spend on security devices, gates, tags, staff, RFID …etc., to protect their media, while simultaneously providing self-service to patrons. allCIRC™ is installed in various libraries across the country.

Library Automation Technologies Inc., (LAT) founded in 2001 has installations in hundreds of libraries throughout the United States. LAT’s sole mission is to help libraries and data centers to work better, smarter and more securely. LAT’s innovation earned the firm the coveted “#1 Fastest Growing in South Jersey, 2005” by the Philadelphia Business Journal, as well as a “Finalist in the Family Business of the Year, 2006” award presented by Farleigh Dickinson College. LAT further continues its growth expanding into automation by delivering media dispensing line of products solely dedicated to library operations.

If you’d like more information about this topic, or to schedule an interview with Oleg Boyarsky / CEO, please call Robert Baker at: 856-566-4121 or e-mail Robert at: Bob@LATcorp.com

The Mark O. Hatfield School of Government honored Dr. Edward J. Latessa with the Hatfield Scholar Award. Dr. Latessa has led a distinguished career in the field of Criminal Justice and is currently a Professor and Head of the Division of Criminal Justice at the University of Cincinnati. He has co-authored seven books including Corrections in the Community and Corrections in America. Additionally,

Senator Mark O. Hatfield, for whom the award is named, said “I admire [Dr. Latessa’s] dedication to public service. Oregon is a state that values new ideas that serve the cause of social justice and consequently, we are proud that he would accept this award.”

Dr. Latessa’s intrepid perspective on academic practice has inspired the creation of two highly reputable online Criminal Justice degree programs. In 2001, the University of Cincinnati launched a Master of Science in Criminal Justice to great success. When approached about the possibility of launching a Bachelor’s degree Dr. Latessa recommended Portland State University’s own Division of Criminology and Criminal Justice as the ideal candidate and in 2005 this recommendation came to fruition.

At the award ceremony, Dr. Latessa said “I have dedicated most of my career to trying to improve programs, trying to make us a little more effective. I am happy if I can get one program, make it more effective, and change a few peoples’ lives. Many times the difference between us and the people that are incarcerated is a very small, thin line. It’s important that we understand that they are human beings, they are citizens, they are our neighbors that are incarcerated. It’s important to work hard to see that what we know works its way into the field.”

About Portland State University
PSU was founded in 1946 to help educate returning World War II veterans, and continues this tradition of adapting to changing social and educational circumstances. PSU’s Criminology and Criminal Justice division, part of the Hatfield School of Government, has been awarding bachelor degrees for nearly 40 years. The online learning program enables distance learners to interact with an interesting, passionate group of fellow students and learn with the same distinguished faculty that teach the on-campus program.

The 2009 TAP Award, a scholarship program and one-time grant opportunity for outstanding professionals and philanthropists, has now been announced. We are now accepting applications for the Fall 2009 award.

From the scholarship information page:

The goal of this program is to assist future professionals and philanthropists in obtaining an undergraduate or graduate degree that will allow the winners to continue in pursuing these ideals.

Professionalism, as we will define it for the purpose of this award, is independent of career field. It is a mind-set, a way of thinking and behaving both in and out of the public eye that defines a person. A restaurant cook may be every bit as “professional” as a doctor or lawyer. Applicants must demonstrate, in their own words, why they consider themselves to be professionals.

Philanthropy, as we will define it, is not about writing a check to a charity. As considered for this award, philanthropy embodies a true spirit of giving and giving back. No money needs to have changed hands for the successful applicant. Rather, applicants must demonstrate how, through 100 hours or more of community or volunteer service, they have helped to enrich the lives of others. Again, applicants must prove to us how they have themselves lived as philanthropists and will continue to do so.

Undergraduate members of The Aspiring Professional may begin completing their 2009 Application immediately. Applications must be finalized by June 15, 2009.

More information about the 2009 TAP Award may be found at:
http://www.aspiringpro.com/award/scholarship.php