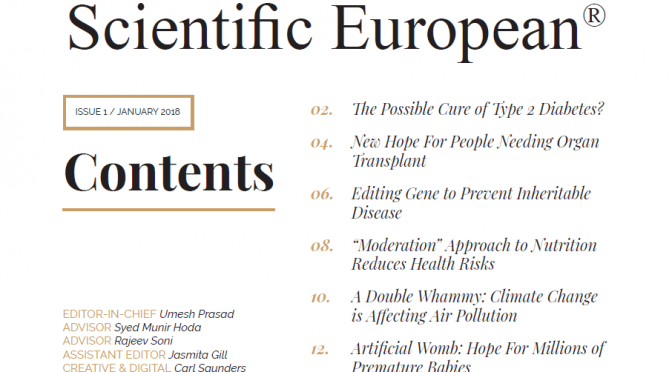 Abbreviated as SCIEU®, the magazine Scientific European® (pISSN 2515-9534; eISSN 2514-9542) aims to bring current happenings in science to a wider audience to make them aware of advances in the scientific fields. Interesting and relevant ideas from diverse areas of science are conveyed with clarity and concision. The articles present ideas that have already been published in the peer-reviewed scientific literature in the recent past. It is both online and print magazine released on a monthly basis and is targeted at general readers of all age groups and geographies who are interested in science and technology.

Umesh Prasad, Founder & Editor-in-Chief said ‘’We always thought there was a greater need to bring cutting edge relevant scientific advances to general audience across the globe for their appreciation because at the end of the day science must serve society and intellectual stimulation of the people has the potential to further advance science itself. The idea to launch a popular science magazine titled Scientific European arose out of my discussion with Cambridge alumnus molecular biologist Dr Rajeev Soni and here we are with the maiden issue of Scientific European (SCIEU). With immense pleasure, we bring to you hugely relevant recent scientific advances on six key themes, compiled and presented by Jasmita Gill and I. With this we embark on the eternal journey to bring scientific advances to the living rooms of the people across the world’’.

More information about the magazine can be found at www.scientificeuropean.co.uk; www.scieu.com